In Madrid, From Grocer's Market or Recycle Bin, Music Made Possible 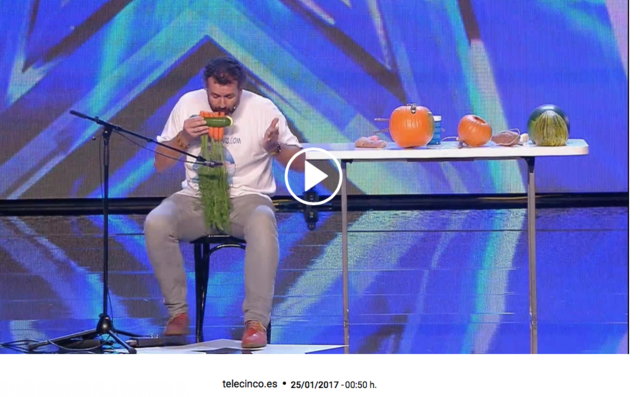 On the TV show, Spain's Got Talent, Hamish Binns performs a series of songs using instruments he created from vegetables.

Suppose you wanted to play the cello but you didn't want to pony up $5,000 for one of the cheaper student models. You're in luck! You can construct your very own cello from a coffee can, some wooden spoons, a milk carton and a few other items. You can also make a bass from a wooden toilet seat, a ukulele from a cigar box, a guitar from an egg box, or a sitar from an olive oil can. In fact, you could create an entire orchestra using common discarded or recycled items.

My friend Hamish Binns, who lives in Madrid, will be happy to show you how to do it. His website, Seis Pingüinos (https://www.seispinguinos.com/reciclinstrumentos.html), is dedicated to making music education fun for children (of any age). One section of the website focuses entirely on musical instruments made from recycled objects and others are made from, yes, vegetables! Hamish started the website about five years ago and now has almost 100 instruments posted with videos you can download that will show you how to create music on recycled objects and garden-variety staples such as potatoes, carrots and eggplants.

Even if you're not in the mood to build an instrument, visit the website anyway. You'll have a good time listening to Hamish play "When the Saints Go Marching In" on the musical bottles or "Smile" on a piano made of chopsticks! And even if it's not the season, you'll find plenty of cheer in "Jingle Bells," a family presentation played on a variety of homemade instruments.

The producers of Spain's Got Talent were so amused by Hamish's creations they invited him to come on the show and bring his vegetables, which he did in January 2017. A video of the Telecinco hit show is on Youtube, but unfortunately we here in the States cannot watch, as it's not authorized to play here. (I did, however, manage to get a screen grab of Hamish performing.)

At any rate, the judges loved the novelty of the carrot panpipe with the green tops still intact and hanging from the upside-down carrots, as well as the pumpkin ukulele. He brought along some other vitamin-rich instruments and when he finished his performance, the audience gave him a standing ovation.

The whole Seis Pingüinos project is a tribute to creativity and imagination. The Youtube channel has more than 1,000 subscribers and Hamish says the website gets that many views or more each week. Of course, some folks have questions and Hamish answers emails from all over the world, many from teachers. As you may have surmised, Hamish is not a typical Spanish name. He grew up in England and has Scottish roots, all of which is to say, he can answer emails in English and Spanish. The website is mostly in Spanish but there is some English as well.

"It's really fun seeing some of my instruments and my designs being used," Hamish told me in his modest, understated manner. He continues to develop new instruments all the time and while I was in Madrid, he was working on a new hurdy gurdy, an instrument from the Middle Ages, which he made with a wine box.

When I met Hamish at Saint Louis University Madrid in 1998, he was teaching English as a Second Language and he and his band, Finis Terrae, were just releasing their first album. The band was a big hit in Madrid and around Spain and produced half a dozen albums, with most of the music composed by Hamish, who also played a gazillion instruments and was the lead singer.

Hamish continues to teach at the university, where his wife, who is known as Susi, also teaches and is a professor of dance. In addition, Susi is a physical therapist currently designing a new technique for enhancing performance and preventing injuries in dancers. (What a talented family!) Finis Terrae Kids performs once every month or so. The band gets a lot more requests than it can fill, due to time constraints.

If you're wondering about the colorful illustrations on the Seis Pingüinos website, they were created by Homero Villagra, originally from Chile and a longtime resident of Madrid. A talented guitarist and singer, he was one of the original members of Finis Terrae and continues to be a part of Finis Terrae Kids and Seis Pingüinos. Another gifted member is Robbie K. Jones, who makes the best animal noises ever recorded. (He also plays a variety of instruments and founded the Americana Music Jam Madrid).

Hamish and Homero teamed up to create the Seis Pingüinos Activity Book as well. (It's available on Amazon along with the CD.)

When I watch the Seis Pingüinos demonstrations of how to make recycled instruments and listen with joy to the mini-concerts, I always think of Philadelphia and its persistent 26 percent poverty rate. Making music from found objects could make a lot of kids happy in a city that constantly struggles to find sufficient dollars for education, never mind the arts and music.

In 2017, the Philadelphia School District freed up 1,000 broken instruments that had been stored away for lack of funds, after a great many people put out a huge effort to draw attention to the issue. Prize-winning composer David Lang wrote "Symphony for a Broken Orchestra" and 400 musicians, including members of the Philadelphia Orchestra, performed its debut.

I would so love to see a similar concert played with all handmade instruments created from discarded common items and recycled objects. And vegetables, too. Imagine how much fun the kids would have. And maybe, with any luck, just maybe some Pingüinos from Spain might show up!