Prelude to Córdoba, Jewel of the World 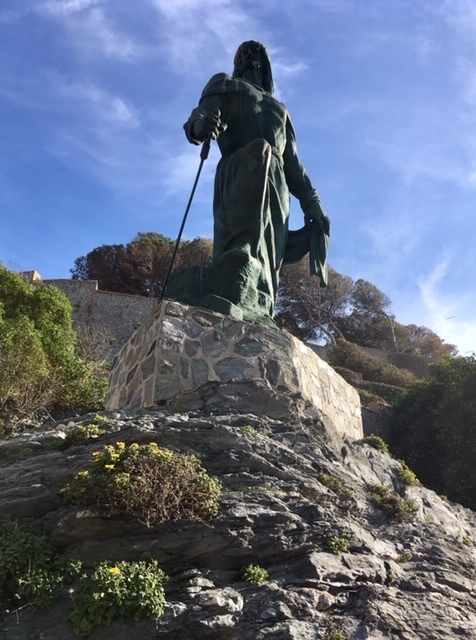 Al-Rahman I arrived in Almuñecar in 755. The city erected this statue in 2005 to note the 250th anniversary of his arrival.

Wanderers often wonder whether to pursue knowledge and culture or just kick back and relax at, say, an inviting beach. The seductive splash of the waves, the cascade of blues that blend sea with sky, the fresh daily offerings of the fishermen; the Mediterranean coast has the power to soothe. I was ready.

That beach the taxi driver told me about? I reserved a hotel room for three nights and ended up staying for six. Almuñecar, however, unexpectedly offered not just a respite, but the beginning of the story of the Muslim conquest of Andalucía. Almuñecar is where Al-Rahman I arrived in 755 after escaping the purge of the family dynasty in Damascus.

As I had just come from Granada, where the Muslim reign in Spain ended in 1492, I was surprised to find myself in the place where it began.

The Muslim conquest of Spain that became politically established with the arrival of Al-Rahman I and the Christian Reconquista that finally was completed by Queen Isabella and King Ferdinand is a period in history that perpetually fascinates.

In just a few days, I would be on my way to Córdoba, where Al-Rahman I began the incredible mosque that stands today. It was expanded by his sons and grandsons and later transformed into a spectacularly gilded cathedral in the 13th century when the Christians retook the city.

But Córdoba was days away. After dropping off my bags at the lovely antidote to my tiny cube in Granada and flinging open the curtains just to stare at endless sea, I was ready as always to take a walk and explore the town.

Almuñecar is a small resort town of about 30,000 people, which like all waterfront towns swells in the summer. It was founded around 600 B.C. by the Phoenicians, who called it Sexi. When I first saw that name on some of the touristy kitsch, I thought it was some kind of beach branding -- bikinis, Speedos, all that. Silly me.

Most of the businesses were closed as it was off-season, but there were plenty of British and German tourists who did not mind and seemed to be having a grand time in the sun.

The hotel offered three meals a day and nighttime entertainment such as flamenco, games, guitar concerts, etc. Plus there were a few nearby restaurants that were open, along with some souvenir shops and newsstands. I chose to eat in the places away from the hotel, but if I were not as mobile as I am today, I would not mind a bit hanging out there.

I met up with a couple from Cheltenham, England, who had spent 10 days at the hotel. Annette, who did most of the talking, told me about a British author who had written a novel, The Return, about the Spanish Civil War. Apparently, Victoria Hislop is a best-selling writer. I wasn't familiar with her work, though I now intend to read that book.

But I digress. As I walked along the beautiful seaside sidewalk, I came upon a gigantic statue and discovered it was a tribute to "Abd Al-Rahman I … the only survivor of the Umayyad dynasty," as the sign explained. "Later he founded the Emirate of Córdoba, which was independent of Bagdad and so beginning a new dynasty in Al-Andalus." The sculpture had been created by Miguel Moreno, an artist from Granada. I was intrigued to find yet another documented piece of the story of this epic Islamic conquest and Christian reconquest.

The peaceful, tranquil days in Almuñecar energized me. (They believe in free tapas here, too!) The hotel clerk got to know me as that woman who kept asking to stay one more night. But, finally, I knew it was time to head to Córdoba. That involved a two-hour bus ride to Málaga, where I caught the train to Córdoba. Another small hotel room, but this one was a lot more comfortable!

At the top of my sight-seeing list, of course, was the Mezquita.The city's most famous landmark, the Mezquita is spectacularly emblematic of the passionate conflict between Muslims and Christians that spanned 700 years. A sea of red and white double horseshoe arches in the high-ceilinged mosque is surrounded by Christian chapels filled with dazzling displays of gold sculpture and religious figurative paintings, with a cathedral in the center of it all. The juxtaposition of the two competing sensibilities provides a profound and jarring experience, to say the least.

But there is so much more to Córdoba than the mosque. During the 10th and 11th centuries, the Muslim city was the largest and most sophisticated city in the western world, possibly the entire world, some historians say, and was filled with libraries, paved streets with lights and an educated population. It was dubbed the Jewel of the World, supposedly by a German. For roughly 300 years, Muslims, Jews and Christians lived in peace and worked together to produce this accomplishment. While the tolerant Umayyad leaders encouraged Jews and Christians to participate in the culture, the government did demand a special tax on non-Muslims. Only one public synagogue remains, but as the House of the Sefarad reveals, some homes had synagogues within.

The golden period in Córdoba preceded the European Enlightenment by more than 400 years. Much of the translation work completed during these years is credited with saving ancient knowledge of science, math, astronomy, and medicine plus poetry, literature and more.

A most excellent book on this subject was published in 2002 by Maria Rosa Menocal, a Yale professor. The Ornament of the World: How Muslims, Jews and Christians Created a Culture of Tolerance in Medieval Spain documents this remarkable era. I find myself re-reading it from time to time.

Córdoba seems to have been a magnet for civilizations long before Al-Rahman I, who was only the latest to arrive. Before him were the Neanderthals, Iberians, Phoenicians, Romans and Visigoths. The city's Archaeological Museum has displays from all of the cultures: coins, pottery, statues, column capitals, even an excavated portion of a Roman theater. As the museum explains in its excellent posting, the theater's seating code reflected the class divisions of Roman society. Senators got the best seats, followed by patricians, free plebeians, freedmen and slaves, and in back of everyone, did you guess it? Women!

For me, there was no down time in Córdoba. Everything there fascinates. Oh, OK, I did stop in at the hairdresser one day. You know, those pesky roots can get so showy! I had to do a little self maintenance. Got to keep up appearances, even if you're traveling solo.

One place I was determined to visit was about 20 minutes west of the city, the Madinat Al-Zahra. Fortunately, there was a bus whose only purpose was to shuttle people back and forth. This was to be a new city, "a shining city," that would be the capital of the Western Umayyad Caliphate. It is only partially excavated and much of it was destroyed only 70 years after it was built, but the vision and ambition are ample. It's a bit of an ordeal to visit, but completely worth it. Once you take the bus to the site, you can visit the museum and view some of the techniques used in building. This was most welcome, though not exhaustive. I'm still curious.

After the museum, you take another shuttle, which runs every 20 minutes, to the actual site, where you can walk around for hours, if you're so inclined. I had climbed maybe one too many alcazars, so I only went halfway down, but the views were spectacular and the breadth of the construction humbling.

I stayed an extra day in Córdoba for a total of six and could happily go back for another six. The place enthralls me! Sadly, however, they're not big on tapas in Córdoba. Maybe a few olives, delicious, and no complaints, but after Granada and Almuñecar, well, one does get accustomed to free food pretty fast! The Cordóbeses do make a really great eggplant tapa, fried and drizzled with honey.

I couldn't decide where to go from Córdoba. After six days in a cramped but nicely appointed hotel room, I needed some space. I even considered returning to Almuñecar. I loved it so. But it seemed silly to waste an opportunity to visit someplace new. I wanted to go to Extremadura and visit the far reaches of the Roman empire, Mérida and Cáceres, but the bus ride was more than I could muster (nothing against ALSA) and the train took even longer. I found a beautiful apartment in Jerez de la Frontera, a place with a kitchen, large dining room table, a place where you can sip coffee without getting dressed for the outside world, a place where you can construct a salad and read the news online. Yes, I was ready for some semblance of home and this was just the place. Who knows what I will discover once I get away from this keyboard? Maybe some really great flamenco!