In Granada, No More Regrets 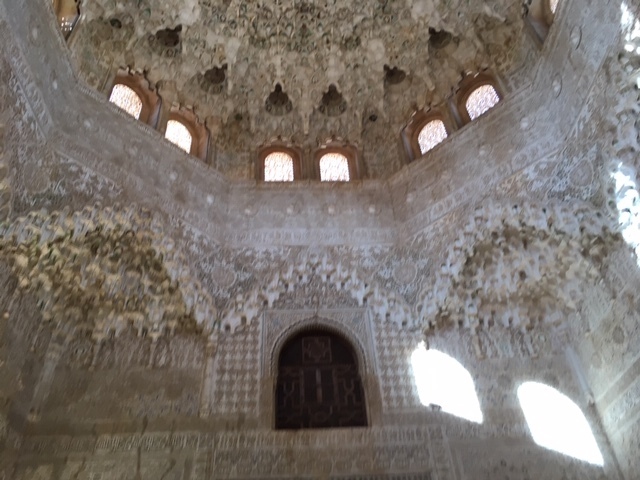 An eight-point star forms the cupola in the Hall of the Two Sisters, possibly referring to Gemini.

I had always dreamed of visiting the Alhambra ever since Washington Irving helped me win my first game of Authors. Maybe I was nine years old. Who knows. I was a kid and I loved that card game. The book titles suggested mystery, adventure, all kinds of unknowns. How could you not be entranced by a title like Tales of the Alhambra?

Decades later, I made my first visit and it was overwhelming in its beauty, grandeur, endless details of craftsmanship and precision. The only problem was, the night before I met up with some people at the bar/restaurant near my hostal. It was a mix of Americans and Spaniards and going along with them from place to place (who am I kidding, bar to bar), seemed like a good idea at the time. But as the night wore on and finally out, I was left with just a few hours, or was it minutes, of sleep. I did my best at the Alhambra the next day, but eventually I just crashed and headed back to my hostal to sleep. I was scheduled to leave the next day.

I always felt I had given this incredible monument short shrift and felt terribly regretful, even guilty, about it. So when the older and sadder but wiser version of myself was lucky enough to visit again, I was determined to do it right. I allocated an entire week for this historic city in Andalucia, home not only to the Alhambra but also to Federico Garcia Lorca, eternal poet laureate of Andalucia.

I had prepaid for what I thought would be a comfortable home base for my excursions, but when I opened the door and dropped my bags, I almost wept. The room was small and had an odd feeling to it, no windows, just a door that opened onto a "terrace," which was surrounded by walls and mechanicals. The stall shower stood solitary at attention in the middle of the room. I've stayed in tiny rooms in hostales before, but the feng shui in this one was just disturbing, not sure why. Later, I discovered that as soon as I lay down, I was immediately awake. Insomnia is bad enough on its own, but in a strange place it can be utterly disorienting. But don't take my word for it, check out Mark Twain's "My Long Crawl in the Dark" from Part I of A Tramp Abroad for a hilarious but spot-on description of such suffering.

At any rate, sleep issues aside, I was (and am) traveling at a leisure pace and wanted to the save the Alhambra for a day when I felt settled and could focus completely on the barrage of brilliant sculpture, ceramics, design, scripts, everything about the place that manages to completely overwhelm the senses. As I was not staying in a five-star hotel with endless services, I had some practical issues to deal with, like laundry. I needed to do some. And even though I had packed slowly and methodically before leaving Málaga, I left a key piece of my electronics converter there and my computer notebook was about to say adios.

But on my first full day in Granada, I wanted to scope out the city, so after a bracing cafe con leche, I set out to walk up the Carrera del Darro, which tends to go up and up and up and up into the Sacromonte, where people once resided in caves. The street was so narrow, you had to turn sideways when a bus passed. I was intoxicated by the sun and the mild air and the challenge of finding the end of the road, which I never did. I turned back and walked past the Plaza Nueva, across the street from my hostal, and kept going and going. I walked past Queen Isabella's cathedral, past the Cortes Ingles, a university, endless shops, bars and ice cream heladerias. According to my phone, I clocked nine miles.

The next day, I tracked down a laundromat and walked a mile with my backpack of dirty clothes. What a lovely respite it turned out to be, a beautiful bright laundromat with perfumey soaps and modern dryers. The owner sold large bottles of laundry detergent and had samples on a table. Women came in and smelled the various scents then had long conversations about the properties of each, etc. My clothes came out soft and warm and smelling delicious. Checked that one off my list. Next I wanted to track down the plug I needed, but it was too late. I would do that tomorrow.

Little did I know that tomorrow was the Día de Andalucía, which I only discovered when the next morning I walked up to the taxi driver and asked him to take me to the FNAC, where I was sure I could find the right piece. All the stores were closed, it's fiesta day, he told me.

Great. So I walked another eight miles around the city, checking out various monuments and places on the map that seemed interesting. The town was packed with people, kids eating candy and ice cream, grown-ups drinking beer and wine and eating tapas. It was sunny and warm, what's not to like?

But the Alhambra! On day four, I decided my great quest could wait no longer. I had clean clothes, I had read the books, what was I waiting for? The guide book suggested the best way to approach the monument was to hike up the Cuesta de Gomerez, which happened to be the street where my hostal sat. I thought sure, that's a great idea...feel how remote it is sitting at the top of the mountain, pass through the Puerta de las Granadas. I didn't know it was over a mile straight up. But I made it, and walked around and realized I wasn't even to the ticket office; that was further up the hill. By now, I was a little winded and the sun was strong and I had forgotten to put on sunscreen, oh the perils. When I made it to the ticket office, it was blocked off. The sign said all tickets were sold. No more entrances that day. One of the officials told me it was best to buy your ticket on the internet to make sure you got one before they were sold out. Yes, I should have planned better, but this type of trip is about not planning.

I was devastated. People were milling about. Everyone seemed upset and so was I. Finally, I walked away and saw a bus and took it back to the Plaza Nueva. After three days of walking up and down steep hills, I was hot and tired and didn't know what to do. I spotted one of those flashily painted tourist buses that drive you all over and for the first time in my life, I bought a ticket to be escorted about on a bumpy bus. I was like George Clooney at the end of Michael Clayton, "just drive."

On the bus, I'm thinking maybe I won't even go to the Alhambra again. Maybe one time is all one gets in this life. Too bad if you didn't do it right. Well, that was a bit harsh, but I wasn't thinking very clearly.

Finally, I'd had enough of the bumpy bus. It was time for tapas. This is what I ate for free in Granada: bacalao, clams, steamed prawns, fried calamari, chicken, mussels, fried anchovies  (boquerones), potato chips, potatoes with sauce (patatas bravas), endless olives, cheese and ham. I'm probably forgetting some of them. It's staggering the amount of food they give away in this city. How can you not love it?

Finally, I returned to my room to read my new book about Boabdil, the man who ended the Nasrid rule in Spain when he handed over the keys to the city to Queen Isabella and King Ferdinand on January 2, 1492, ending 700 years of Muslim governing.

On this my fourth night, I finally sleep a bit, despite the bad feng shui, stale air, and crying baby down the hall.

I wake up on day five uncertain what to do. Should I track down the electronic plug I need or try again at the Alhambra? I want to put aside yesterday's defeat. But surely my computer has died by now. I take it out of my bag and sit down on the bed. There is a micrometer of juice left, according to the little bar on the bottom right. That usually means it will shut off as soon as you open it, but luck was with me. I found the official website and discovered that this day was the only one not sold out until the following week. I couldn't believe it. If I had gone to the FNAC instead of looking online, I never would have been able to buy a ticket. My computer would be working, but the Alhambra would be beyond my reach! What a close call!

The computer lasted long enough for me to secure my ticket. I dressed quickly and ran out to hail a cab.

I wanted every ounce of energy for my adventure.

I left tortured grandiosity, hopped into a cab and went straight to a slick, giant sanitized suburban mall in Armilla, just outside Granada, where the FNAC and another store I didn't know about, MediaMart, had exactly what I needed. Talk about time travel, from the middle ages to the 21st century, in just 20 minutes. Anyway, the taxi driver, handsome, young and talkative and a native of Armilla, offered lots of information. I was interested in a beach, anything nearby. He told me about a place called Almunecar, only an hour away, where his parents always took the family when he was a child.

He also gave me perfect directions for how to catch the trolley back to Granada. Having finally accomplished my goals in this grand city, I was ready for a break. I booked a room in a hotel on the taxi driver's childhood beach, a place I never even knew existed until that momentous ride. Thank you to the universe for letting me forget that computer part!

Thus ends happily another tale of the Alhambra.