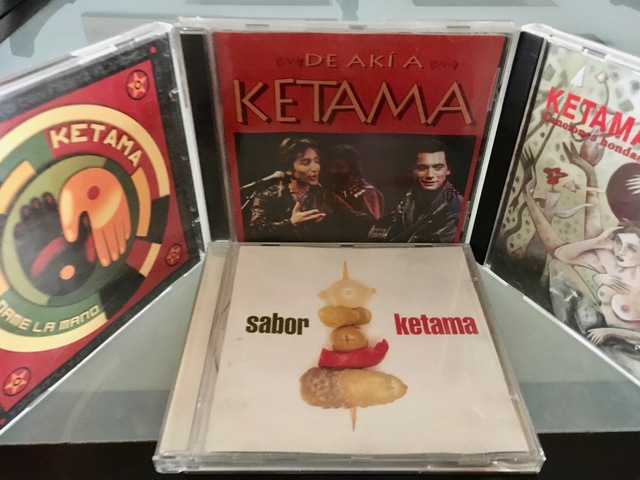 A few of Ketama's albums.

Kudos to the Philadelphia Free Library! To my surprise, just recently I was able to find a copy there of The Flamenco Clan: Herencia by Ketama, a documentary film made in 2004 by the German filmmaker Michael Meert.

Beautifully rendered, visually and musically, the film recounts the story of the Habichuela/Carmona dynasty of brilliant flamenco artists, who moved from grinding poverty in Granada to Madrid, where they eventually became celebrated musicians. The offspring of the two pioneering brothers make up the core of the New Flamenco group, Ketama. Antonio and Juan José Carmona, who are brothers, and their cousin, Josemi Carmona, found a way to successfully blend pop and flamenco to create some unforgettable music. José Soto and Ray Heredia also were important during the band's early years. Ketama was immensely popular throughout the '90s, though some accused them of a fusion sell-out. Their response was, hey, we're bringing a new audience to flamenco. I can vouch for that. Needless to say, I fell hard for their music and bought my first CD (at the FNAC in Puerto del Sol), De Aki A Ketama, their breakthrough album of 1995, which sold over 600,000 copies. Then I found Dame La Mano, Sabor and, possibly their first album, made in the '80s, Canciones hondas (Deep song, a style that predates flamenco and was celebrated by Lorca).

In the early 2000s, the group disbanded, though individual members continued to perform and Antonio Carmona, the lead signer, released a couple of solo albums.

Last November, I discovered through an article in El País online https://elpais.com/cultura/2018/11/13/actualidad/1542138868_276109.html, that Ketama was getting back together and launching a big tour throughout Spain in 2019, starting out, of course, in Granada, on February 23. For a moment, I imagined I would be there, but that didn't quite work out. Still, I'm hoping  to catch at least one of their shows this year!

Reading about the revival tour inspired me to revisit the documentary, pull out my old CDs and visit Youtube, where you can find some great performances such as "No Estamos Lokos," incidentally the name of their 2019 tour. One of my favorites, "Se Llevaba Llevar," https://www.youtube.com/watch?v=VIRX69FD2m0, features the hugely popular (and guapísimo) guest singer Antonio Vega (RIP/DEP), of Nacha Pop and solo fame.

My friend Hamish Binns, who lives in Madrid and is a musician, composer and builder of musical instruments from found objects and even vegetables (!), told me about Ketama. (Thank you, Hamish! BTW, he's also a professor.) I had asked for some suggestions and, along with Ketama, he mentioned Pata Negra, another New Flamenco group. I enjoyed the music of Pata Negra, but Ketama stole my heart. Their music is filled with beautiful melodies, incredibly complex rhythms (like any flamenco), passion, mystery, despair, and what they call in Spain alegria, which is more than just joy or happiness.

Perhaps, you would like to enjoy this music as well!

And they're bringing the next generation along, too:

El Alma No Tiene Color (The Soul Has No Color),
https://www.youtube.com/watch?v=YLPpRLMe3fI